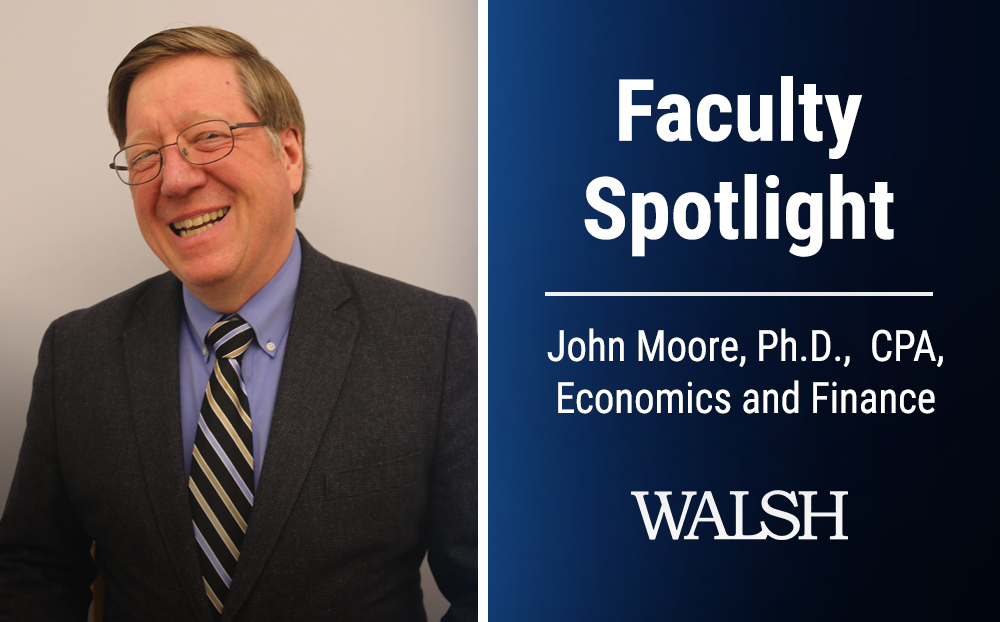 The best educators, the ones we remember long after we’ve left the classroom, do more than transmit knowledge; they help their students develop a lifelong passion for learning. John Moore, Ph.D., professor and chair of Walsh’s finance and economics department, has been doing just that for his students for years.

Moore understands the balancing act required of adult learners who work while going to school. At age 31, he became CFO for Michigan’s largest industrial commercial real estate developer. But rather than coasting, Moore decided to improve his skill set by returning to school. What began as a short-term plan turned into a life devoted to teaching, mentoring, and scholarship.

From CFO to PhD

As a CFO at a young age, Moore explains his decision to go back to school, saying, “I was in a new position at a very young age. I could debit, credit, and do tax returns with the best of them. But all of the sudden, I was in a position where I had to do a lot more than just accounting and I realized I needed to bump up my skill set.” When a close friend suggested a graduate degree from Walsh as a way to shore up his skills, Moore jumped at the suggestion.

Moore continues, “When I was an undergraduate, I had all the things that make college a wonderful place: the learning, the discourse, the lifelong friends. But making a choice to go back to school as an adult has a different purpose; you’re suddenly there because you choose to be, not because you have to.”

Of his time at Walsh as a student, Moore says, “Walsh is a wonderful place. I can look you in the eye and honestly say that as a CFO, I used the degree I got from Walsh more than any other degree I’ve earned. Walsh gave me a broad insight into the business world that I did not have before I attended.”

When Moore made the initial decision to return to school, he certainly wasn’t expecting to leave a thriving corporate career to work full-time at Walsh, but that’s exactly what happened. His transition began in 1994 when he became an adjunct professor in Finance and Economics and when he began working towards his doctorate in 2003.

In 2008, the then chair of the finance and economics department asked Moore if he would consider trading in his role as CFO for a full-time teaching position at Walsh, and he jumped at the opportunity. The transition might have been obvious for Moore, but he jokes that his wife of 38 years wasn’t always so sure. Although he had her blessing when he initially went back to school, Moore jokes, “I don’t think she quite knew what she was getting into. There were some years there where she didn’t see me much.”

Although it was a challenging road at times, Moore relished the opportunity to immerse himself in learning and research as a student for more than two decades. His dissertation, “Interests and Ideas: Industrialization and the Making of Early American Trade Policy, 1789-1860,” explored how industrialization altered both the economic development and trade policies of the United States. A chapter of his dissertation won the Colonial Dames Award in 2010 as the best graduate level paper from a Michigan-based university or college relating to American history before 1800. A second portion of his dissertation was published in the 2011 edition of Essays in Economic & Business History and won the James Soltow Award for best article by a new author.

Just last year, he was a Voluntary Exchange Award finalist for the best paper contributed to the Independent Review special seminar issue on the topic of “Social Justice” for the article entitled “Considering Twenty-First Century Social Justice in the United States: Intersecting Catholicism, Citizenship and Capitalism.”

Moore goes out of his way to engage his students and make learning relevant to their jobs and lives. He says, “Sometimes, a student has a question and I know it’s a good one. Rather than stick to a static lecture plan, I’ll take a ten-minute detour. You don’t want to miss those magical learning moments. They’re always impromptu and you’ve got to grab them whenever you can.”

For Moore, this level of engagement is part of what makes a Walsh education invaluable. He says, “What makes Walsh special is the personal investment our professors offer to our students. Our faculty truly cares about the success of each student. It’s part of our culture.”

Moore speaks of his own mentors with the utmost respect. Having been mentored by the best himself, he made a conscious decision to give back to his own students. He says, “I’ve been blessed with a great set of mentors from some of the finest schools in the county, and I’ve gone on to work alongside friends and colleagues who studied under Nobel Laureates and Pulitzer Prize winners.”

Moore is a hands-on, engaged instructor committed to helping Walsh students work through difficult problems and develop deep understanding of the subject matter. Not satisfied with simply referring a student for tutoring, he often spends time talking through a particular problem, then offering a tailored recommendation to address any gaps in learning.

He spends time outside class to connect with students and says, “If I have a student contact me saying ‘I’m not doing too well,’ I try to take the time to understand the problem and the student’s needs. I’ll cover topics again, reinforce them, and put some meat on the bones to help them get their bearings. More importantly, I’ll point them towards Walsh’s resources, like our free tutoring program, to make sure they are getting what they need.”

Another way Moore gives back is by maintaining a strong network of connections in the business world and keeping in touch with his former students. Moore says, “There’s nothing more gratifying than helping a student connect with the right opportunity. I’ve taught for a long time, and many of my students have become very important people at their institutions over the past twenty years. That means I can call a former student who is now a senior vice-president and let them know I’ve got a student in mind if they have any job openings.”

Whether he’s watching baseball, studying military history, or having a deep intellectual conversation with friends, Dr. Moore is as engaged and curious today as he was as an undergraduate student. That, along with his commitment to helping Walsh students thrive, is what makes him such an effective educator and asset to Walsh.

Walsh Students Gain Valuable Hands-On Experiences Remotely
April 4, 2022
We use cookies on our site to provide you with a better online experience. If you do not want to receive cookies, you can change your cookie settings. Please visit our Privacy Policy for more information. By using the site or clicking on Agree, we assume you agree to this and our Terms of Use. Accept All
Manage consent