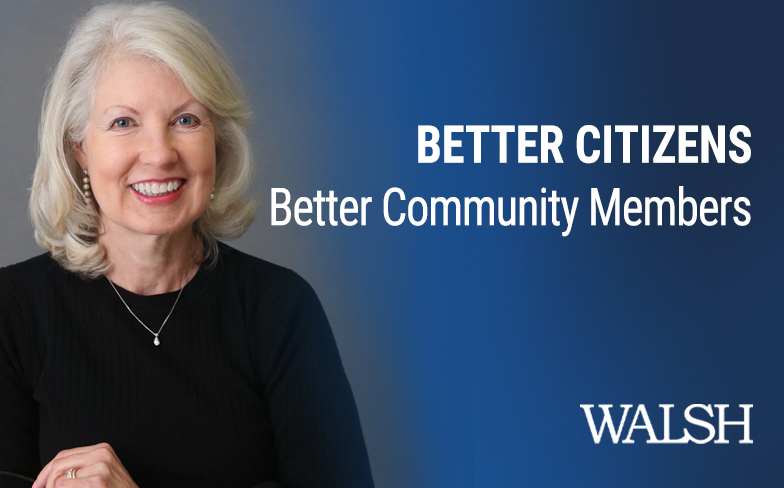 Rebecca Sorensen was a divorcee attending community college when a chance conversation with a professor put her life on a whole new path. The 24-year-old was taking accounting classes and doing well. “My professor was incredibly kind and supportive of me,” says Sorensen, who is now a senior vice president of UBS Financial Services. “He put in a call to Walsh admissions on my behalf — I didn’t know of Walsh — and also asked about scholarships for me.”

She applied, was accepted, and did receive a scholarship. In 1985, she graduated with a Bachelor of Accountancy. “I received a great hand up,” says Sorensen. “It was a pathway out of my situation and a pathway to success.” As difficult as those years were— driving from Flint to Southfield for an internship, taking classes until 11 p.m. in Troy and doing it all over again the next day — Sorensen says that they inspired her desire to volunteer and serve. “Walsh changed the trajectory of my life,” she says. “It gave me the impetus to move forward.”

Today, Sorensen has melded a wide range of interests and volunteerism into her latest venture with friend Laurie Horvath, a CPA and partner with Baker Tilly. The nonprofit Smart Girls Book Club emerged in the aftermath of the tragic Sandy Hook Elementary School shootings in 2012. Feeling dejected, the two friends wondered if other women might be interested in educating themselves about topical events. “We hoped a nonfiction book club would be a way to spark conversation on current issues with the result of inspiring positive change in our community,” says Sorensen. Originally called Books for Women with Passion and Purpose — a name Sorensen says “no one could ever remember” — the Smart Girls Book Club is structured around meeting quarterly to discuss a nonfiction book, then listening to a panel of speakers on the topic. The panel at times features the author and/or other subject matter experts, say Sorensen and Horvath, who kicked off the first SGBC in January 2013 with 50 attendees at a Birmingham restaurant.

Since that first meeting, the duo has cultivated a list of 150 diverse members from all walks of life, a move that was intentional, Horvath says. “The beauty is hearing a college professor discuss what she thinks, then hearing what a just-graduated social worker thought,” she says. “There’s no hierarchy.” As moderators of the panel discussions, Sorensen and Horvath take turns with the microphone. Topics run the gamut from human trafficking to the Constitution. Some examples, from the fall schedule, included discussions about the books: Crossing the Line: A Fearless Team of Brothers and the Sport That Changed Their Lives Forever, with panelists from Detroit Horse Power and Black River Farm and Ranch, as well as author Kareem Rosser, and Motor City Mafia with the CEO of the Detroit Historical Museum.

Meetings are often held in places that echo the book’s content. For example, the meeting for Thunder Dog, a book about a man and his guide dog was held at Leader Dogs for the Blind in Rochester Hills, Sorensen says. It’s this kind of synchronicity that inspires members to not only volunteer for these organizations, but also mobilize in what Horvath calls a “done-in-a-day” way. Through the group’s Facebook page, a member may mention something  a nonprofit may need, and within moments, the need is taken care of. “These are what we call ‘magic moments,’” Horvath says. “It’s beyond rewarding to see.” Although the two have what they call “consuming” day jobs, they say that they will continue with the book club. “There’s part of us that always wants to be learning, to stretch our brains, to expose ourselves and become better educated in important topics,” says Sorensen. “It makes us better citizens and better community members.” For more information, visit the Smart Girls Book Club (Detroit) group on Facebook and ask to join.

Full-Court Press: Domenic Policicchio III, BBA-MGT ’18
February 14, 2022
We use cookies on our site to provide you with a better online experience. If you do not want to receive cookies, you can change your cookie settings. Please visit our Privacy Policy for more information. By using the site or clicking on Agree, we assume you agree to this and our Terms of Use. Accept All
Manage consent