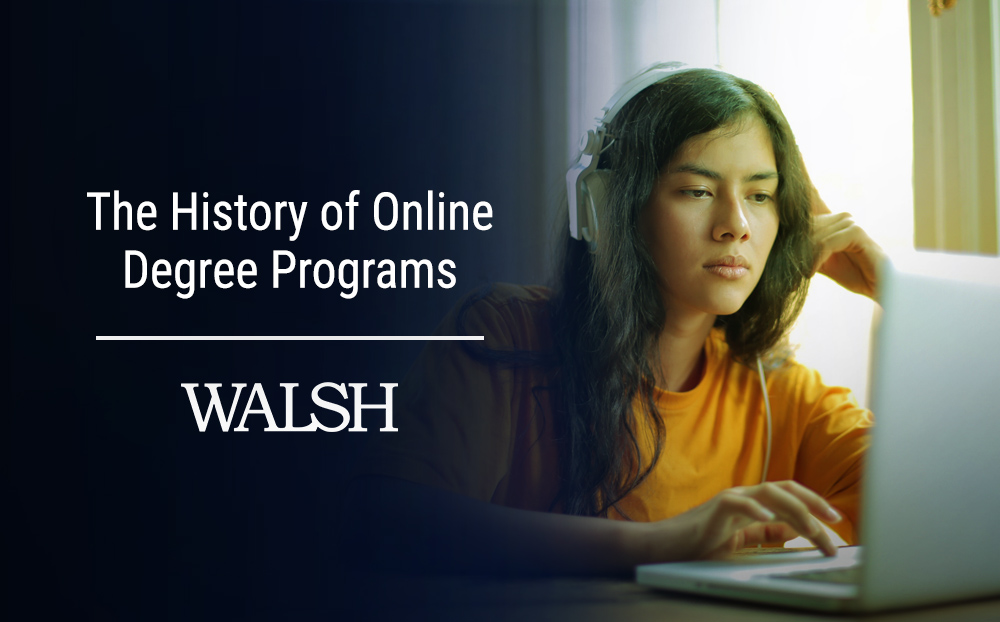 The History of Online Degree Programs

Society has a long and complex relationship with innovation. On one hand, we reward novel ideas and forward thinking. But for every groundbreaking approach and new discovery we embrace, there are at least as many we resist or outright dismiss.

History is littered with examples of brilliant ideas that were once maligned. At the time of its invention the lightbulb was deemed a “conspicuous failure,” the bicycle “doomed,” and the automobile “impractical.” In retrospect, it seems no new idea is safe from the public examination; not even the cheeseburger (“bizarre”), nail polish (“strange”), or the movies (“gimmicks”).

With such a long history of hesitancy towards innovation, it should come as no surprise that some struggle with novel approaches to learning and education. Nowhere is that struggle more evident than in the persistent myths and misconceptions surrounding the distance learning revolution and the advent of modern online degree programs.

The History of Remote Education

Distance learning through correspondence schools was revolutionary in that it represented a reliable and cost-effective path for students who traditionally lacked access to education and the improved career prospects education affords. Relying on letter writing as “the most widely accessible new technology” to connect teachers and students, the earliest experiments in distance learning applied mostly to university extension programs and occupational training. While correspondence schools didn’t take off in the United States until the 1890s, the earliest mid 19th century efforts at distance education became the forbearers of the modern online degree program.

From the mid-19th century to the 1970s, remote learning continued its steady expansion, depending mostly on increasingly sophisticated uses of media. In the 1970s, online and virtual education continued to reach a larger number of students and was slowly becoming more accepted by authorities and the general public as a legitimate way to learn. But it wasn’t until the 2000s and the advent of high-speed internet that distance learning programs truly began to take off.

Almost as soon as modern distance learning emerged into the mainstream in the early 2000s, the chorus of naysayers began an all-too-familiar refrain: “What a terrible idea! Are you trying to ruin education? Students can’t learn online. It’s preposterous!”

But if our goal is to learn from history rather than repeat it, it helps to view distance education and online degree programs as innovations akin to automobiles, television, and computers. Although most of us couldn’t imagine a world without them, even these remarkable innovations were once labeled as inherently flawed. And so it goes with online degree programs: although they’re sometimes dismissed as “new-fangled” or “inferior,” the weight of evidence behind them is proving exactly how beneficial and life-changing they truly are.

Despite common objections to remote learning, online degree programs moved from “trend” straight into the dependable mainstream with an 18.8% increase in students enrolled in online courses between 2010 and 2012. What that sizeable growth demonstrates is exactly how well online degree programs meet the needs of students, standing in the gap for those who can’t attend traditional brick-and-mortar schools due to cost, geography, or time constraints.

Accessibility and flexibility continue to be two of the most important benefits of online degree programs and stand out as some of the biggest plusses for potential online degree students. When combined with online degree programs’ unique ability to tailor learning towards the individual rather than sticking to the contiguous group learning model, remote learning’s cost effectiveness, flexibility, and tailored approach to learning has shown itself to be a winning combination for students around the globe.

Although the rate of students enrolling in online courses has slowed somewhat over the past decade, “The 9.7 percent growth rate for online enrollments far exceeds the 1.5 percent growth of the overall higher education student population.”

In 2017, 4.6 million (32%) students in public institutions participated in distance education in some capacity, and 1.6 million enrolled exclusively in distance education courses. Although we don’t yet have reliable statistics for 2020, it’s safe to assume online enrollment will have increased from 2017 levels across the board as many more students and institutions come to rely on the distance learning model in the face of global health challenges.

Although the perception of online degree programs has greatly improved since the early 2000s, there is still some work to do to catch society’s understanding of remote learning up with the reality so many online students have come to know and enjoy. In “The Future Has Already Happened: Dispelling Some Myths of Online Education,” researchers say:

“Unfortunately, the online education produced in many instances by institutions worldwide, has generated a poor opinion towards the so-called ‘direction of the future’. Myths and suspicions about online learning and teaching have arisen and include perceptions that students are left to their own devices without any guidance and therefore ‘teach themselves’. Fear of inactive student participation in online courses and increased isolation for students has led to anxiety about how the technology will replace the teacher. Online delivery is commonly viewed cynically as a cost-cutting measure without any proper justification on pedagogical ground.”

Fortunately, as society’s perceptions of the individual catch up with the rapidly changing world, we become more likely to support online degree programs rather than criticize or dismiss them.  Educational experts suggest we’re undergoing a reimagining of the world with “…increased access to different ideas and abilities that characterize the way we now live our lives. This is particularly pertinent to educational technology because education has a constant influx of new generations, often with a very different understanding of the world than their teachers.”

At its core, the stubborn adherence to traditional modes of education goes all the way back to the Byzantine Empire, when Plato and Aristotle imagined the role between teacher and student. Their ancient philosophies of education place the teacher, not the student, at the center of the learning process. Students learn what is passed down from the teacher through drill and rote learning, often competing with one another to demonstrate how well they understand what’s been taught.

Information Age students, tasked with becoming critical thinkers who add real value to their workplaces, can best be served when the ancient model of education is replaced. In stark contrast to 4th century ideals, online education at Walsh invites students to partner with their teachers in the learning process. The classroom becomes a place where ideas are considered and discussed, and the teacher becomes a facilitator, guide, and mentor rather than the all-important “sage-on-the-stage.”

As we move away from ancient educational practices and rigid student-teacher roles, students take their rightful place as active participants in their learning. Along the way, we must work hard to dispel myths surrounding online degree programs. Developing a fuller and more nuanced understanding of the shift towards online learning can help us direct conversations about how to best shape the future of education in a way that fits all students, not just the ones the educational system has historically catered to.

To provide maximum flexibility for students, Walsh offers courses in a variety of formats.

Walsh Students Gain Valuable Hands-On Experiences Remotely
April 4, 2022
Go to Top
We use cookies on our site to provide you with a better online experience. If you do not want to receive cookies, you can change your cookie settings. Please visit our Privacy Policy for more information. By using the site or clicking on Agree, we assume you agree to this and our Terms of Use. Accept All
Manage consent